Maybe like me, you have been wrapping gifts lately. I love to wrap gifts. Some find it a chore but I find it relaxing and enjoyable. Whether it is wrapping gifts for family, company Christmas parties, special occasions or “just because” gifts, I can sit for hours on the floor in front of the TV wrapping. When wrapping gifts I tend to use a lot of tape (so my family tells me). I want everything neat and tidy. Gift bags are great, beautiful and perfect for certain gifts but I still like to wrap boxes with pretty paper and ribbons. Of course with mostly boys in our family I don’t get much chance to make things “pretty”. I don’t think they really care that much about ribbons and bows. But, even the simplest of gifts can seem special when in beautiful wrappings. While wrapping Christmas gifts this year, I have been thinking about the best gifts any of us could ever receive, those gifts weren’t pretty by human standards but they were the most special of all – priceless in fact.

The gift, the reason we celebrate Christmas is the birth of Christ. His birth was not what we would call beautiful by our earthly standards, would we? Let’s review the special wrappings around Jesus’ birth.

“So Joseph also went up from the town of Nazareth in Galilee to Judea, to Bethlehem the town of David, because he belonged to the house and line of David. He went there to register with Mary, who was pledged to be married to him and was expecting a child. While they were there, the time came for the baby to be born, and she gave birth to her firstborn, a son. She wrapped him in cloths and placed him in a manger because there was no room for them in the inn. 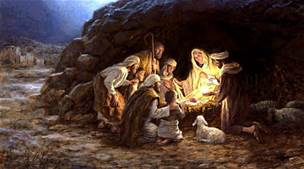 And there were shepherds living out in the fields nearby, keeping watch over their flocks at night. An angel of the Lord appeared to them, and the glory of the Lord shone around them, and they were terrified. But the angel said to them, Do not be afraid. I bring you good news of great joy that will be for all the people. Today in the town of David a Savior has been born to you, he is Christ the Lord. This will be a sign to you: You will find a baby wrapped in cloths and lying in a manger.

Suddenly a great company of the heavenly hosts appeared with the angel, praising God and saying, Glory to God in the highest, and on earth peace to men on whom his favor rests.” (Luke 2:4-14)

God had a purpose in sending Jesus to earth. It was to save mankind by being the perfect, once for all, sacrifice for our sins (yours and mine). It’s sad to think that all could have been different if only obedience had prevailed in the Garden of Eden but, God loves us all so much that He made another way for us to live with Him forever. His name is Jesus. The crucifixion, cruel as it was, was a gift to us, wrapped in hardship and intense pain but mostly wrapped with a love that is beyond our understanding. This wrapping for all to see was harsh and inhumane. Jesus gave for us…oh what a love!

“What shall I do, then, with the one you call the king of the Jews? Pilate asked them. Crucify him! They shouted. Why? What crime has he committed? asked Pilate. But they shouted all the louder, Crucify him! Wanting to satisfy the crowd, Pilate released Barabbas to them. He had Jesus flogged, and handed him over to be crucified.

The soldiers led Jesus away into the palace and called together the whole company of soldiers. They put a purple robe on him, then twisted together a crown of thorns and set it on him. And they began to call out to him, Hail, king of the Jews! Again and again they struck him on the head with a staff and spit on him. Falling on their knees, they paid homage to him. And when they had mocked him, they took off the purple robe and put his own clothes on him. Then they led him out to crucify him.” (Mark 15:12-20)

Not a pretty wrapping for this very special gift was it? Thankfully, the story does not end there. Jesus was once again going to give us a gift and it also was wrapped.

“Now there was a man named Joseph, a member of the Council, a good and upright man, who had not consented to their decision and action. He came from the Judean town of Arimathea and he was waiting for the kingdom of God. Going to Pilate, he asked for Jesus’ body. Then he took it down, wrapped it in linen cloth and placed it in a tomb cut in the rock, one in which no one had yet been laid.” (Luke 23:50-53)

“On the first day of the week, very early in the morning, the women took the spices they had prepared and went to the tomb. They found the stone rolled away from the tomb, but when they entered, they did not find the body of the Lord Jesus. While they were wondering about this, suddenly two men in clothes that gleamed like lightning stood beside them. In their fright the women bowed down with their faces to the ground, but the men said to them, Why do you look for the living among the dead? He is not here; he has risen! Remember how he told you, while he was still with you in Galilee: The Son of Man must be delivered into the hands of sinful men, be crucified and on the third day be raised again. Then they remembered his words.

When they came back from the tomb, they told all these things to the Eleven and to all the others. It was Mary Magdalene, Joanna, Mary the mother of James, and the others with them who told this to the apostles. But they did not believe the women because their words seemed to them like nonsense. Peter, however, got up and ran to the tomb. Bending over, he saw the strips of linen lying by themselves, and he went away wondering to himself what had happened.” (Luke 24:1-12)

The thing about gifts is that they can be given freely but it is up to the recipient whether or not to unwrap and receive the gift. You see, the gift of Jesus was opened that day as He rose from the dead. He unwrapped the gift for us. But, we still must receive it to ourselves. It’s simple. Here is all that is required: Believe in Jesus, repent and ask forgiveness for our sins, go in faith, loving God and others. Then, you will receive another gift – the Holy Spirit to live within you helping you to trust God and follow Him in loving obedience.

“Jesus answered, I am the way, and the truth and the life. No one comes to the Father except through me.” (John 14:6)

Then, we can all look forward to the ultimate gift!

“”Do not let your hearts be troubled. Trust in God, trust also in me. In my Father’s house are many rooms; if it were not so, I would have told you. I am going there to prepare a place for you. And if I go and prepare a place for you, I will come back and take you to be with me that you also may be where I am.” (John 14:1-3)

So, as you celebrate this Christmas, please don’t overlook the real gift – Emmanuel – God with Us!