Two weeks ago my grandson and I planted some radish seeds in our garden. The soil had been well prepared. It was fed, tilled and ready for seed. The seeds were pretty small and we had to be careful not to let several fall into one spot. God brought the rain shortly after but I didn’t even think to check on the seeds until my husband asked about them. He’s the vegetable gardener in the family but because of a recent injury, I’m the backup plan. Anyway, sure enough – those little seeds had sprouted through the ground. Those tiny leaves were a beautiful sight. Only problem is that there are huge weeds mixed right in there with the seeds. It’s frustrating that the weeds grow so much quicker and larger than the plants! The dilemma…do I pull the weeds and the plants along with them since they are so fragile, or wait a bit. It made me think of God’s Word (seeds planted into our hearts) and the weeds that come in to crowd it out. 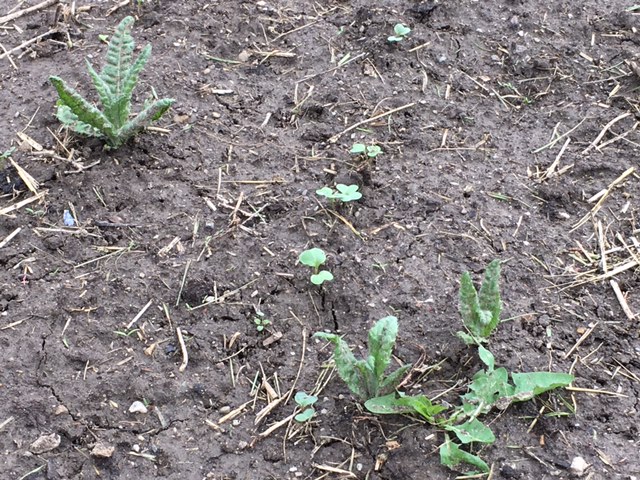 Matthew 13:3-8 “Then he (Jesus) told them many things in parables, saying: “A farmer went out to sow his seed. As he was scattering the seed, some fell along the path, and the birds came and ate it up. Some fell on rocky places, where it did not have much soil. It sprang up quickly, because the soil was shallow. But when the sun came up, the plants were scorched, and they withered because they had no root. Other seed fell among thorns, which grew up and choked the plants. Still other seed fell on good soil, where it produced a crop – a hundred, sixty or thirty times what was sown.”

Then Jesus explains the parable…

God’s Word and God’s Love are seeds that we should plant into our lives and the lives of others. I’m sure most of us have been recipients of seeds planted by others. The question is, what have we done to bring those seeds to harvest? While God will provide all we need to make those seeds grow correctly, we still have to do our part. Just like planting the seeds in the ground, we must plant God’s Word in our hearts.

Back to our vegetable garden – We also planted several rows of onions. Those were not seeds at all, they were what look like dried up onion bulbs. Those have not sprouted leaves yet. They are still soaking in the nutrients of that well fed soil. That’s what we need to do with God’s Word isn’t it? Soak it up, immerse ourselves in it so that it’s in our hearts and minds. Then the Holy Spirit will bring it to our remembrance when we need it in our daily lives. About those onion sets though…I realized as we were covering them up with dirt that some of them had been planted upside down. So, we had to go back and plant them correctly. Another reminder to treat God’s Word correctly. We can’t pull something out of it to make it fit what we want. It doesn’t work that way and we certainly won’t produce a good harvest. God tells us not to add to or subtract from His Word. We are also not to twist it around. The one who does that will be thrown into the pit of fire at the end. You can find that truth in God’s Word. Read it through to the end. It’s the greatest story ever told – a true story – a promise we can trust in – GOD IS FAITHFUL AND TRUE. He will produce a good harvest if we plant correctly.

Galatians 6:9 “Let us not become weary in doing good, for at the proper time we will reap a harvest if we do not give up.”