Did you ever play that game when you were a child? It seems to me that we played it a lot during recess at my elementary school. Two lines were formed after selecting teams. These lines faced each other with a fair amount of space between them (allowing for running speed). Then the team members locked arms and called someone from the other line/team “over”. That person had to run and try to break through the linked arms of the opposing line of people. 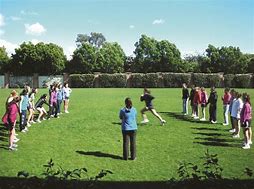 If they broke through, they could take one person back to their team/line. If not, they became part of the opposing team’s line. On and on it went. However, I couldn’t remember how it ended. Maybe the team with the most people at the end of recess won. I’m not sure. But, for some strange reason, I was thinking about that game the other day. So, I just did a little on-line research and found this for how the game ended:

Play Red Rover until one side has all the team members. (With this method of ending Red Rover, note that all the children are winners, because they all end up on the same side.) If time is short, the team with the most people wins.

I don’t remember that we ever ended up with all members on the same team, but it sure sounds great, doesn’t it?

That’s what God’s goal is for all of us (His creation) – that we all end up on the same team/ same side – His side, Heaven bound, saved by the blood of Jesus Christ.

1 Corinthians 12:12 “The body is a unit, though it is made up of many parts; and though all its parts are many, they form one body. So it is with Christ.”

Unfortunately, God has given us all free will and many will not choose Jesus. By the time their life ends, they will want to change their minds, but it will be too late. God tells us there are two paths (teams) – one is a narrow path, leading to life (fulfilled life here and eternal life in Heaven after physical death) the other is a wide road, leading to destruction (self-destruction here on earth leading to full-time, eternal torment in hell). 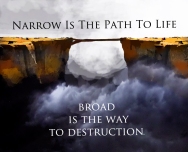 If we want our loved ones, friends and neighbors (and yes, even our enemies) to have everlasting life with God in heaven, we must play the game (or run the race) in a way that leads others to Jesus and onto God’s team.

Acts 20:24 “However, I consider my life worth nothing to me; my only aim is to finish the race and complete the task the Lord Jesus has given me – the task of testifying to the good news of God’s grace.”

Hebrews 12:1 “Therefore, since we are surrounded by such a great cloud of witnesses, let us throw off everything that hinders and the sin that so easily entangles. And let us run with perseverance the race marked out for us,”

I will never think of that game the same way again. I want to be ready to share the hope I have in Jesus to those people God places in my life.  Like God, I want them on His Team. So I say…