Spring is fast approaching. Flowers are poking their heads out of the ground; birds are singing; and we are all starting to get “spring fever” – itching for warmer temperatures. At least here in the Midwest we are. As I am witnessing nature’s new birth, I am reminded of something that happened several months ago. My husband regularly sprays for bugs inside the house. We don’t mind the little creepy crawly things God created but would much rather they stay outside. Anyway, one day I was in my sewing room sitting at my desk and my husband walked past with a sprayer. He was spraying around the baseboards with what he thought was bug spray. However, I noticed that the container said weed killer. I asked him about it thinking that JUST MAYBE, he was using an old container but had the correct mixture inside. But, not so. He had simply picked up the wrong one. In his behalf, they do look very similar – same size, same brand, same spray nozzles. Unfortunately, he had already gone through most of the house before I noticed what he was doing. The good news is that no weeds have grown up in our house this year! 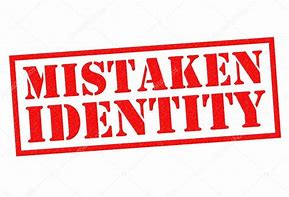 Have you ever mistaken a stranger for someone you knew? I have. And, I have had people ask me if I were someone who I’m not. I’ve heard many times that “we all have twins/look-alikes”. Maybe that’s so. It may be something in physical appearance or expression but whatever it is, it does happen.

I think the most heart-wrenching story of mistaken identity that I can think of is the one that began on April 26, 2006 when a van collided with a tractor-trailer. I’m sure most of you can remember the story as it was all over the news. One young woman died and one lived. They were mistaken for each other and the mistake was not realized until five weeks after the accident. I cannot imagine the emotions those two families went through. Across the nation people grieved and sympathized with all of them. It was hard to fathom. It seemed impossible that something like that could happen, but it did.

Just like the above example, in the case of the weed killer and bug spray mix-up, the mistaken identity went unnoticed for quite a while. The weed killer spray had already covered most of our house before being recognized for what it really was. Isn’t that like Satan? He gets in and covers quite a bit of ground before we know he is “in the house” so to speak.

These mistaken identities are innocent mistakes. But Jesus warns us of others who purposefully try to get us to mistake their identity. These identity mistakes have eternal consequences. The bad news is that it must be easy to be misled because we are warned many times against it. The good news is that we can be prepared, and our eyes can be open to the imposter. God provides all we need to discern the truth and recognize the true Messiah. Lies are often disguised as truth. We must be on guard and be in constant contact with the truth giver – God himself. Here are some things God says about mistaken identities.

Matthew 7:15 – “Watch out for false prophets. They come to you in sheep’s clothing, but inwardly they are ferocious wolves. 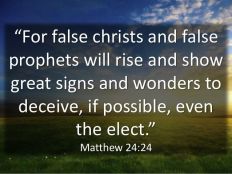 1 John 4:1-6 – Dear friends, do not believe every spirit, but test the spirits to see whether they are from God, because many false prophets have gone out into the world. This is how you can recognize the Spirit of God: Every spirit that acknowledges that Jesus Christ has come in the flesh is from God, but every spirit that does not acknowledge Jesus is not from God. This is the spirit of the antichrist, which you have heard is coming and even now is already in the world. You, dear children, are from God and have overcome them, because the one who is in you is greater than the one who is in the world. 5 They are from the world and therefore speak from the viewpoint of the world, and the world listens to them. 6 We are from God, and whoever knows God listens to us; but whoever is not from God does not listen to us. This is how we recognize the Spirit[a] of truth and the spirit of falsehood.

2 Peter 2:1-3 – But there were also false prophets among the people, just as there will be false teachers among you. They will secretly introduce destructive heresies, even denying the sovereign Lord who bought them—bringing swift destruction on themselves. Many will follow their depraved conduct and will bring the way of truth into disrepute. In their greed these teachers will exploit you with fabricated stories. Their condemnation has long been hanging over them, and their destruction has not been sleeping. 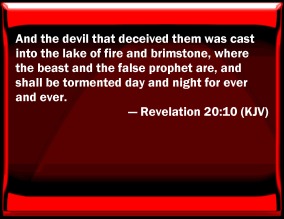 The moral of the story is this… those who remain faithful and watchful; those whose hope and trust is in the Lord; and those who stand firm and stay strong win in the end!